Let's be clear, the use of Fluorine containing refrigerants is unsustainable both for the future health of our planet and their poor energy efficiency.

The serious issue of HFC refrigerants impact on Global Warming is well documented, the F-Gas regulations were conceived to tackle this type of pollution. However, counteractive solutions have unfortunately led to the wide spread deployment of HFO refrigerants. HFO’s have been found to contribute to another lesson known (but equally damaging) form of pollution – namely they contain PFAS (Poly-Fluorinated Substances) which is a whole new area of pollution and one not just isolated to the refrigerants sector.

Scientists are increasingly concerned about PFAS, or more commonly known as ‘Forever Chemicals’. These are chemicals which do not degrade in the environment and in fact scientists are unable to even estimate an environmental half-life for PFAS. There are serious concerns these chemicals are entering our food chain, bioaccumulating in our bodies and the environment at large, the list of potential side effects for our world is long.

INCREASING LEGISLATION TO DEAL WITH THE THREAT

The important issue of PFAS pollution is now gathering momentum and governments around the world are deciding how to react to it. In Norway for example, they have recently proposed an outright ban on HFO Refrigerants and we can only assume that the use of such chemicals will increasingly become highly regulated and controlled.

HFO and PFAS pollution is now another area of real concern to add to the long line of phase downs and bans effecting synthetic refrigerants that date back over 35 years, with serious threats surrounding the Ozone layer, Global warming and now PFAS Bioaccumulation.

The EU has formed a regulatory frame work called REACH (Registration, Evaluation, Authorisation and Restriction of Chemicals). REACH addresses the production and use of chemical substances and their potential impacts on both human health and the environment. The issues presented by PFAS could well go onto affect the synthetic refrigerants market as adversely, if not more so than the subject of global warming is currently doing.

The original F-Gas regulations are also set to tighten significantly further in the coming months, at a time when Heat Pump market is required to grow exponentially due to the decarbonisation of heat agenda, now further compounded by the war in Ukraine and the consequential focus on reducing the global dependency on Russian fossil fuel (Natural Gas).

There is a great deal of irony in the fact that the electrification of heat is heavily dependent on substances that cause significant pollution whether these are HFC or HFO refrigerants, of which the common theme is Fluorine. In summary, the use of Fluorine containing refrigerants is unsustainable as they cause unavoidable pollution and toxicity as well as being incredibly energy inefficient.

CO₂ is a unique refrigerant which we will all use in the future.

The 'decarbonisation of heat' is an increasing requirement for industry and CO2 is unique in tackling some of the limitations of using chemical refrigerants in high capacity air source heat pumps. The use of Fluorine containing refrigerants in particular is unsustainable.

The table below compares the benefits of CO2 versus all the alternatives currently available. 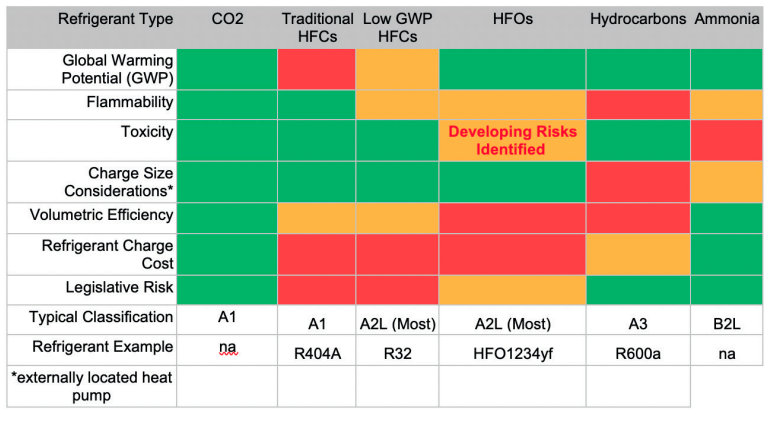 There are currently a limited number of solutions for High Capacity Air Source Heat Pumps and 'Refrigerant Charge size' has been the primary limitation.

Refrigerant Charge Size, put simply is the weight of refrigerant (Kg) fl owing around within each Heat Pump. High capacity Air Source Heat Pumps, require a relatively high charges of refrigerant to operate. A heat pump of 500kW may typically require around 150 kg of refrigerant.

Even natural refrigerants such as Ammonia and Hydrocarbon have severe limitations around their charge size. Ammonia is a B2L Refrigerant, meaning it is toxic and mildly flammable. In order to manage it's less than desirable safety related characteristics, health & safety regulations demand that specialist design and operational requirements are required for all Ammonia systems. Ammonia systems operated within public environments is a particularly difficult application.

Hydrocarbons are again an excellent refrigerant; however, they are classed as an ‘A3’ refrigerant, not toxic but highly flammable and although there are ways around operating high charge Hydrocarbon systems, it is very complicated and has obvious draw backs and consequences. In addition, the specific heat capacity of Hydrocarbons is very low and this results in heat pumps with much larger compressors and pipe sizes.

This brings us to synthetic refrigerants - although many of these have an A1 Classification ie. non-toxic and non-flammable. Some HFC's and HFO’s do though have an A2L rating, which is non-toxic but like Ammonia has low flammability.

Ultimately synthetic high refrigerant charge systems are not an option for a whole host of reasons - not least sustainability and regulation. There are other reasons that charge sizes are limited for synthetic refrigerants, those being price and availability. The F-Gas quotas are such that obtaining high volumes of HFC refrigerants is just not possible, shortages do also occur and these instances are only set to increase with further tightening of the regulations. The low supply and high demand market for synthetic refrigerants obviously transpires in high and volatile prices. In addition, no one can predict the cost and more importantly the availability for servicing synthetic systems throughout their predicted life cycle - this is a big problem.

CO2 is an A1 natural refrigerant – it’s not toxic or flammable and is even in the air we breathe. Therefore, CO2 is unique refrigerant these days, as it can mitigate limitations around refrigerant charge size that all other refrigerants have. This allows CO2 systems to be deployed on a scale and configuration that is entirely flexible without onerous charge size restraints.

Transcritical CO2 heat Pumps have yet another unique property, they can efficiently produce water temperatures in excess of 70°C. To do this they require that their return water temperature is <40°C. This has a positive effect on pipe and pump sizes. The characteristic of a large temperature delta between water fl ow and return is highly desirable and is more akin to a traditional Gas fi red system. It also overcomes the need for huge pipe sizes often seen on other heat pump installations that require a very tight water delta.

Dam the demand - there is an alternative to 'multiplexing'

Many industrial projects with high capacity Air Source Heat Pump requirements employ the solution of 'multiplexing' many smaller heat pumps up in a parallel configuration (as seen below), this solution has many compromises.

This multiplex system has serious limitations: 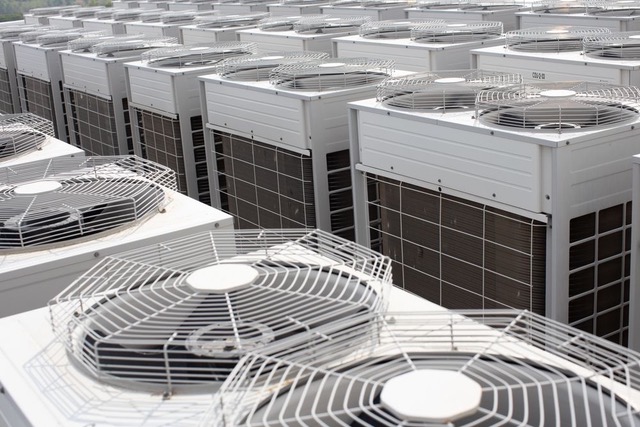 CO heat is a Fluorine Free High Capacity Heat Pump (FFHP) - capable of being a highly flexible Air or Water Source Heat Pump, it can even source from a combination of sources.

Unrestricted refrigerant charge sizes allow CO heat to source heat energy from a network of multiple large evaporators simultaneously. These evaporators can be arranged to suit project requirements and specified to be low noise and most importantly configured to avoid cold air recycling.

Capacities from 75 kW to 1.4MW and water heating to 75°C set CO heat widely apart from any other Heat Pump options.

CO heat stands on its own to deliver a new category of heat pump truly fit for the decarbonisation of heat requirement. 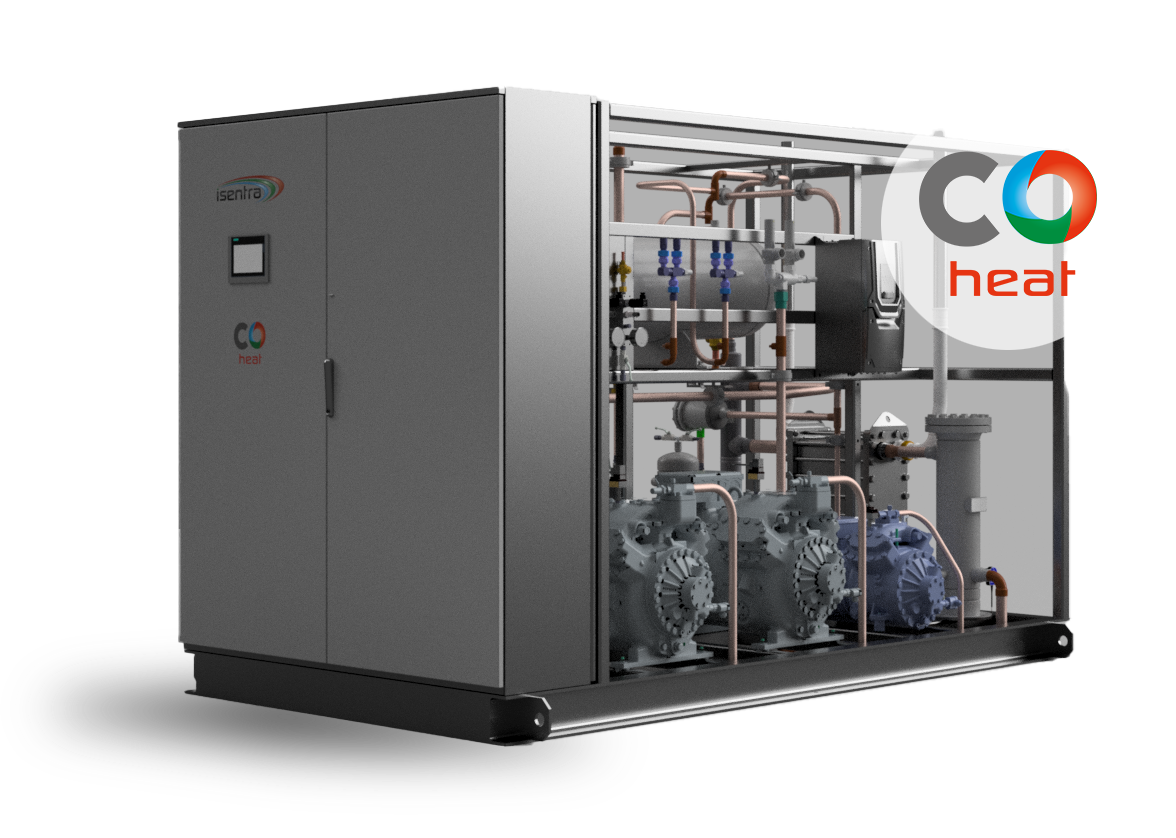